PayScale, a research company that provides salary information, ranked majors based on salary potential as the relationship between college majors and salary potential has risen in importance.

“During a time of both spiraling student debt and tuition rising faster than inflation, post-graduate earnings are a necessary piece of the college decision-making process,” said PayScale’s Lead Economist, Katie Bardaro.

“Although post-graduate earnings shouldn’t be the only consideration when choosing a school, they should certainly play a part, especially when making choices about how much to borrow to fund your education,” she continued. “Students need to know whether they’ll be able to pay off their loans effectively in the context of their chosen field.”

Some majors result in a higher ROI dependent on the institution, as school choice can have a significant impact on earning potential. This is especially true for humanities degrees. 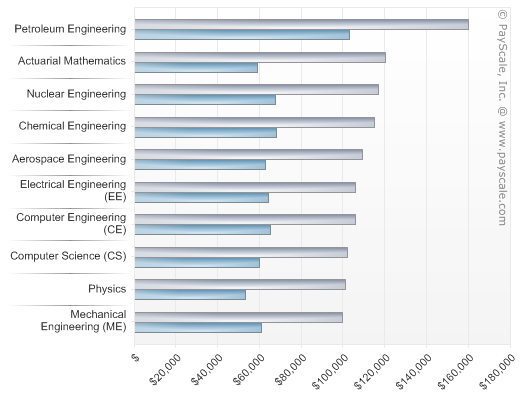 STEM (science, technology, engineering and math) subjects lead the majors with the highest earning potential. Eight out of ten top earning majors are engineering-based, with starting salaries ranging from about $103,00 for #1, Petroleum Engineering, to $61,000 for #10, Mechanical Engineering.

According to the 2013-2014 Pay Scale College Salary Report, the top STEM majors earn about three times more than the average for non-STEM graduates.

Jaccii Barmer is an editorial intern at eCampus News.